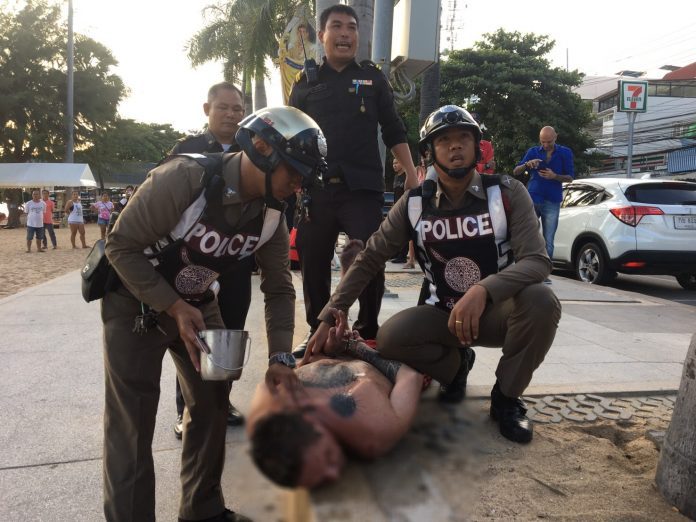 At 6:00 pm on Saturday, June 22, 2019, an unidentified foreign man, wearing nothing except a pair of shorts, was arrested on Jomtien Beach.

Local police responded to multiple calls that an angry and allegedly heavily intoxicated shirtless tattooed man was wandering around the beach area insulting and threatening random tourists and locals. Business owners were complaining that the man was scaring off customers.

When officers arrived they found a man that fit the description who refused to identify himself and seemed heavily intoxicated. He appeared to be in his late forties and possibly of Eastern European descent based on his accent.

Witnesses and our reporters at the Pattaya news watched as the man refused to calm down and refused to follow orders of officers. After several minutes of trying to get the man to comply he made several threatening gestures to police officers and was handcuffed for his and their own safety.

At this point, the man continued to get more upset and spit on an officer and then tried to kick him. Officers brought the man down and under control. He is currently being held at the local police station where officials say he refuses to cooperate or give his information. He had no documents or money on him when he was arrested. Officials are working to identify the man who will face numerous charges for resisting arrest and assault on law enforcement officers.