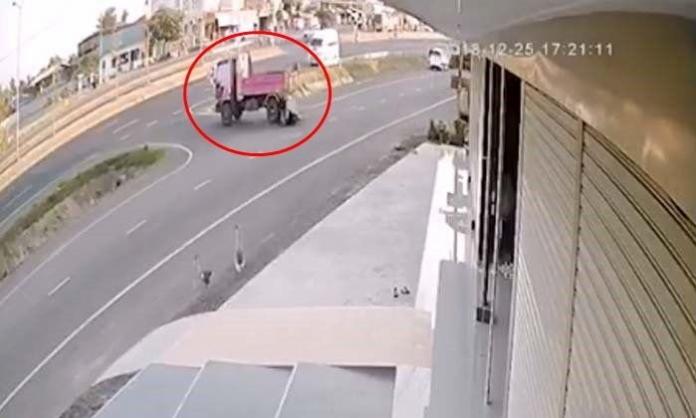 A husband, fed up with a neighbor’s claims that his son was innocent, posted a CCTV clip on Facebook to show what he said was the truth.

Ramak Phaencharoen, 44, from Buriram, asked people on social media who they thought was to blame in the accident that injured his wife Lamai, 44.

CCTV footage from some roadside property showed a six-wheel truck emerge from a side soi onto the local road next to the main road. The earth laden truck went over Lamai on her motorcycle with both its front and back wheels then turned onto the main road.

Good Samaritans rushed to her aid and, reported Sanook, stopped the truck from fleeing the scene.

Fortunately, she was not killed but she needed 12 stitches to an ankle and seven in a head wound and had been unable to work for a month since the accident on Christmas Day.

The driver of the truck refused to help with any payments but Lamai got 28,545 baht from the insurance of the truck.

All of the participants in this incident live in the same village.

Ramak was furious when the father of the truck driver started bad-mouthing his wife saying that she was responsible and was a useless motorbike rider.

Ramak decided to post the CCTV evidence on Facebook to show what he said was the truth.

Lamai told Sanook she was on her way to market. She slowed when she saw the truck that then appeared to stop before speeding up and colliding with her.